Happy new year to everyone! Here we are, it’s January 2012 and … we are still here. Just had to point out the obvious, after all the doomsday scenarious I heard last year (Mayan calendar, etc.) Probably just marked the end of one and beginning of another phase, but more thoughts on that later.

First I’d like to look back a bit to where I left off the last time. I had a longer interpreting assignment in the fall and not a minute to blog at all! Interpreting around the clock, including early mornings and evening functions as well. Exhausting as it was, I had a grate- ful group of delegates and a wonderful trip. The work was exciting and interesting for the most part (which I can’t say about every assignment, let me tell you 🙂 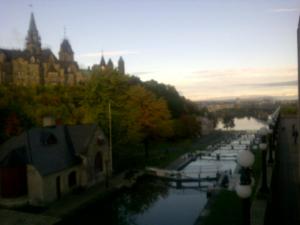 I took these photos with my cell phone, but you still get the idea. This is early morning in Ottawa, with the parliament buildings on the left, taking on my morning walk around the hotel. Nice to have some calm and quiet before interpreting all day.

And this is early morning  in Quebec City; again just around the corner from where I stayed.

Getting back to what I was saying earlier about looking backwards and forward this time of year – while being in the present – brings me to the Hegelian dialectic (by German philosopher Hegel). Apparently, Hegel used a certain formula (dialectic) in his writings. His usual terms for it were: Thesis, Antithesis, Synthesis or also Abstract-Negative-Concrete (see Wikipedia).  “In the Logic, for instance, Hegel describes a dialectic of existence: first, existence must be posited as pure Being (Sein); but pure Being, upon examination, is found to be indistinguishable from Nothing (Nichts). When it is realized that what is coming into being is, at the same time, also returning to nothing (in life, for example, one’s living is also a dying), both Being and Nothing are united as Becoming.” (Wikipedia)

Granted, a little lofty so early in the year, but then again, why not start out lofty and see where life will take me this year? I also like this idea of Being and Nothing “synthesized” into “Becoming” – may be a good focus for this year.

On that note… signing off for today,